Whistler in the Dark Game 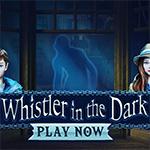 Whistler in the Dark Game: Well, no one can tolerate when something bad happens to kids. But unfortunately, there are still some people who dare to be that evil and that rude to try to harm those innocent creatures, no matter on which way they do it…The twins Paul and Amanda stand in front of an abandoned hotel. This hotel is located in the center of the city where last night happened something that disturbed the peace in the whole city. Namely in Whistler in the Dark Game, two kids, friends of the twins Paul and Amanda, entered into the hotel, listening and following someone’s whistling.

They went there but they didn’t come out of the hotel. The parents of the kids that live on the same street are really upset from what happened to those kids. They decide to enter into the hotel and find out what happen with those lost children. They are prepared to face the truth and save the children, of course if that is still possible. Let’s don’t lose faith and help the parents find the kids who disappeared in the abandoned hotel. Trying hard is the least we can do in this situation, so let’s start right away. You can play this game on all devices. So enjoy and have fun in playing Whistler in the Dark Game.

Play Whistler in the Dark Game