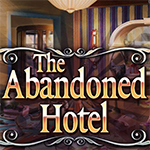 The Abandoned Hotel Game: People who sell have different attitude towards things they sell. Some people simply like to get rid of certain objects. So they don’t mind who will own those objects in future. While other people will be more satisfied if they sell that object to someone that will appreciate it more. It is usually like that when selling objects that mean something more for the person that sells them. And sometimes the seller could have rather specific demands… After a certain time spend on thinking and evaluation, Margaret has finally decided that she likes to buy one abandoned hotel.

However, dealing with her thoughts and calculations appeared not to be enough for owning the hotel. Because the owner of the hotel has set his own conditions for the future buyers. First demand for the new owners is to find his lost personal belongings that are lost somewhere in the hotel. After that, he will give them few riddles that need to be answered correctly in order to get the hotel. Margaret is completely ready for the challenge, so let’s see what will happen. You can play this game on all devices. So enjoy and have fun in playing The Abandoned Hotel Game.

Also make sure to check out Night at Royal Hotel Game, you may enjoy playing it.