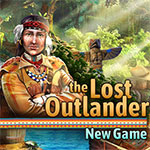 The Lost Outlander Game: Doing good things to other people can’t harm you, they can only make you a better person, be someone better than you. And if we don’t aspire to be a better version of ourselves, than what would the meaning of our existence be. Every people in the history of humankind has it’s own characteristics, something that makes it specific. One of the most peaceful people in the history are the Native American Indians. They adored nature, lived in the manner of respect and devotion to the animals, cared about their families and children. The peaceful lifestyle and point of view inspires people even two hundred years later. With such a positive example we are giving you today.

We are introducing you to young Indian boy who wants to be help people. Enyeto is a Native American (Indian) who very often helps people that were lost coming on his territory. It is the case today as well. One foreign tourist has been lost in not very known territory for the Indians. His friends call for Enyeto to help them in the pursuit of the lost friend. Now, it is a great day for you to help someone in need. Enyeto is going to be thankful! So enjoy and have fun in playing The Lost Outlander Game.