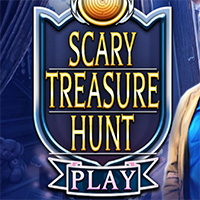 Scary Treasure Hunt Game: We have all heard different stories and rumors about a house that hides a hidden treasure. Maybe not a pirate’s treasure, but someone’s treasure that was forgotten. A treasure that was stolen from someone, treasure from a house whose rich owner passed away many years ago and he didn’t have any relatives… The combinations are numerous, but usually no one takes an initiative to start searching in those houses, so it stays a mystery if those rumors were true, or they are simply rumors. But Jessica, Paul and Patricia are people who are born for adventure.

Actually, they look after mysteries and they like to solve them, even if they include ghosts and other paranormal things. They have been on many missions, but now they are prepared to take the hardest one. Again, it is about a house with a hidden treasure. But this time the rumors say that this particular house is full of ghosts. However, Jessica, Paul and Patricia are prepared even to face those ghosts, if they really exist in the scary house, and get that treasure. You can play Scary Treasure Hunt game on all devices. So enjoy and have fun.

Also make sure to check Alchemist’s Treasure Game, you may enjoy playing it.