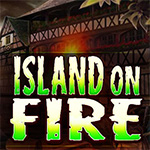 Island on Fire Game: If you ask people that didn’t have any contact with volcanoes, they will probably say that they don’t understand the people that live near volcanoes because they are risking their lives every day. Some volcanoes are peaceful but sometimes it happens even those volcanoes to activate, without any previous warning. However, the people that live near the volcanoes, usually say that they are part of their everyday life and they know how to live with that threat. However, that doesn’t mean that they are not scared from the things that happen around them.

The fireman Roger faces this kind of situation these days. In Island on Fire Game: He has to take care of the volcano that has suddenly activated in the island. All the citizens of the island are in huge panic, they are in a hurry to leave the place. But the fireman Roger has to deal with the raging volcano, keep the local houses safe and stop the fire from spreading all around the place. Roger will need some help from you, so let’s start right away. The volcano won’t let us spare any more time. You can play this game on all devices. So enjoy and have fun in playing Island on Fire Game.

Also make sure to check out Angry Mountain Game, you may enjoy playing it.