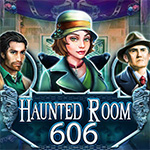 Haunted Room 606 Game: Some killers are caught very fast and it is easy for the police to get into their trace but in some cases, the murder can’t be solved even for years. Some murders are done without previous intent, but some murders are planned carefully. So it is very difficult to find any trace, to find evidence, or even a motive for that murder. Those cases are especially hard for the police. But they are also very hard for the persons who were close to the victim because they spend their days in waiting and agony.

In Haunted Room 606 Game: Dorothy, together with Brian and Kenneth, are the first people who after three months enter into the closed hotel in the center of the city. This hotel has been closed because there were three murders in the room number 606. Those murders were done on a really mysterious way and no one knows anything about them. There is nothing clear about the motives for the murders, about the way they were done. Or about the possible suspects for committing those murders. Now when the team of detectives is here. Dorothy hopes that she will succeed in solving the mystery about the murder. You can play this game on all devices. So enjoy and have fun in playing Haunted Room 606 Game.

Also make sure to check out Room 305 Game, you may enjoy playing it.