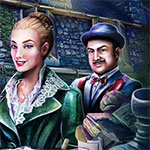 Unearthly Element Game: Many people if asked ‘have you seen a UFO?’ will answer yes! They have seen odd bright lights. Objects that flash and streak across the sky and other strange phenomenon. Are these UFO sightings? Months after a flashing lights were seen in the sky, Deborah can not dare to return back in her house.

Notably on the last clear night in the month, on Saturday night while she was sleeping. A bright white light, larger than any of the brightest starts, appeared from the sky and brightened the entire house before gradually fading, then turning red and disappearing. There was no noise associated with the appearance and no flashing lights to suggest aircraft activity.

From this night, very strange and paranormal thing began to happen in Deborah’s house. Faces began to appear in the mirrors and creepy ghosts started flying around. To find out what really had happened that night when an unearthly light appeared in the sky, she called Anthony and Jessica for help. It appears several people may have seen some movement happening in the sky that night. What do you think? So enjoy and have fun in playing Unearthly Element Game.

Also make sure to check out Land of Silence Game, you may enjoy playing it.