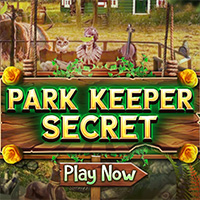 Park Keeper Secret Game: Unfortunately, people can be very insatiable sometimes, mostly when it’s about money. Ryan, who is the keeper of the local park, a person whose job is to keep the place clean and friendly, has to face one unpleasant situation. He loves this park very much and he takes care of the place like it is his own. And that’s why he could not take easy when he heard those news… Namely, he takes pride in his work and when he heard that the director of the park is planning to close it down and build a factory in its place, polluting the environment, he became furious.

Ryan in Park Keeper Secret Game is prepared to do whatever it takes, to uncover the truth. He will do his best to discover if the rumors are true. And after that, he will do everything, to prevent the closing of the park. Ryan hopes that his efforts will help keep the environment safe and clean. Continuing to be the best place for stay in the nature. This is a rather serious job. So we could also help Ryan save the park and stop those actions that will turn the park into polluting factory. You can play this game on all devices. So enjoy and have fun in playing Park Keeper Secret Game.