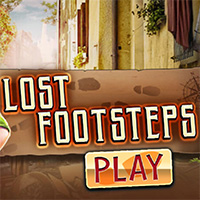 Lost Footsteps Game: Each one of us was in a situation when after a fight that happen with someone in the home, wanted to escape somewhere and stay there for few days. And some of us have a courage to do that. But some simply don’t and they choose another way to deal with the anger in that situation. Amy’s best friend has definitely chosen to take a break by leaving her home. Namely, after a family quarrel, Amy’s friend has left her family house and went into unknown direction. Amy is worried so much about her friend so she decides to follow her traces. She likes to find out where did her best friend go and find her before anything happens to her.

After a while in Lost Footsteps Game: Amy comes to the small neighboring city. It is the place where the traces can be still followed. But in a certain moment, those traces disappear and nothing could point out where did Amy’s friend continue her trip. Maybe we could help a bit in this situation, so let’s search for those traces together and help Amy find her best friend, so she could leave her worries behind. You can play this game on all devices. So enjoy and have fun in playing Lost Footsteps Game.

Also make sure to check out Footsteps in the Dark Game, you may enjoy playing it.