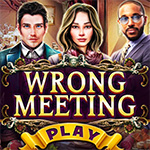 Wrong Meeting Game: When there is money, they is also trouble. It’s not that money are bad or something. Just that usually there are people who like to get money on the easy way. Aside from those people who invest a lot of time and energy to gain those money. We are talking about criminals. The people who are imprudent enough to try to take away from someone, something that doesn’t belong to them.

In Wrong Meeting Game: Paul, Brian and Emily are a group of detectives who are on a mission to find out what happened on the business meeting between two big businessmen. Namely, while they were talking about their job, considering some important aspects of their work. Suddenly a group of masked people came into their office. They surely didn’t expect something like this, but they also didn’t expect that they will be robbed. The two businessmen were left confused. Now it’s up to the detectives to find out who were those people with masks. Paul, Brian and Emily are prepared to do whatever it takes to find out the robbers and put them behind the bars. You can play this game on all devices. So enjoy and have fun in playing Wrong Meeting Game.

Also make sure to check out The Big Robbery Game, you may enjoy playing it.