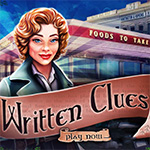 Written Clues Game: Sometimes criminals know to be difficult to follow in a sense that it is really hard to get into their trace. We have to admit that the biggest crimes are not done by naïve people that only think short term. Usually they are done by people with low morals. Bold enough to think that they could take something from someone, sometimes even his life. But that doesn’t mean that they are not clever enough. Sometimes it is completely opposite – the criminals are notably intelligent people who are able to predict every step of the police. And therefor, they are able to hide themselves from the police really well.

Some of them are even prepared to play with the police. Giving them riddles and false traces that only distance them from the real clues. And when it’s about a robbery of the biggest bank in the town. There has to be someone smart enough to do that. This bank has a really great security. But that someone has managed to outwit the security and steal a huge amount of money, including the gold reserves. Patricia is the detective that is in charge for the case, so she starts following the evidences. You can play this game on all devices. So enjoy and have fun in playing Written Clues Game.