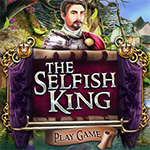 The Selfish King Game: Serving the king could be considered as a privilege since that means that he has enough trust in you. So he could give you the responsibility to take care of him. The servants and the court ladies, then the knights and other higher authorities. They all dedicate their lives for the good of the king and therefore the good of the kingdom. On the other hand, since those people’s work is so dedicated. It is fair the king to be thankful of them and to provide them proper award.

But sometimes the people that are on the top, forget that they couldn’t achieve so much if they don’t have their assistants. The fact that the king wasn’t righteous has provoked even a huge riot in the kingdom. In The Selfish King Game: The knights Amanda and Mark, together with their friends – knights, are about to start that riot. Because their selfish king still hasn’t awarded them with gold for their loyalty. He has promised that but the brave knights are still waiting. Since the king doesn’t take the responsibility, the knights will take the gold on their own. Just that they can’t find it because the king keeps it hidden so well… You can play this game on all devices. So enjoy and have fun in playing The Selfish King Game.