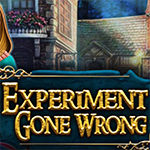 Experiment Gone Wrong Game: We are not scientists and we could not know for sure but often we hear information about certain viruses that have ‘escape’ from the laboratory so they spread around us. Some of them escaped by chance. But some of them were possibly released by someone that likes to harm the humanity. In Experiment Gone Wrong Game: The mad scientist Peter is one of those who like to experiment with dangerous ingredients. Namely, he has made an experiment that turned wrong.

Now there is a huge possibility that all the chemicals used in that experiment could spread around and cause a world epidemic of the deadly virus. However, when there is evil, there is also someone that likes to put stop to that evil. Maria, Julie and Adam are young scientists that are in a mission to save the world from the dangerous experimenting of the mad scientist Peter. They are here to stop him. And for that they should find all the objects needed for making a vaccine against the dangerous virus. Let’s see what is it about and help the scientists stop this horrible virus from overruling the world. You can play this game on all devices. So enjoy and have fun in playing Experiment Gone Wrong Game.