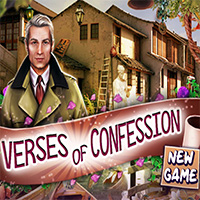 Verses of Confession Game: People say that a secret can’t be kept forever. Even if we don’t tell that secret to anyone. The secret will come out on its own, in one way or another. Maybe our behavior will betray us, maybe we will say something by accident. Or someone has seen us doing that particular ‘secret’ thing… Now, it seems that something strange is going on there in Venice. There was a series of unsolved crimes, actually unsolved murders, that happened in Venice and its surroundings. The police still work on those cases and they haven’t announced anything about them in public, yet.

That’s why it is so strange that Giovanni, a famous poet from Venice, released a poem that contained strange details about those unsolved crimes that are worked on by detectives. It is a mystery how can he know those details that were undisclosed by the police? In Verses of Confession Game: Detective Marcello got the permission he needed to investigate the property of the famous poet. And see for himself if Giovanni is somehow related to these unsolved murder cases or if this is just a coincidence. You can play this game on all devices. So enjoy and have fun in playing Verses of Confession Game.