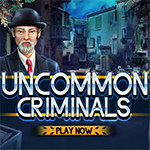 Uncommon Criminals Game: Robbing a bank in the center of the city might seem like a brave thing, but nothing could be brave when it includes making some criminal! The two detectives Beverly and Bruce are in a search of the robbers that are responsible for robbing the bank that is located in the downtown area. It is about a rather urban area, full of traffic and people. But those criminals managed to get into the bank and take what they needed. However, the detectives and the policemen are here to take care of the criminals. So Beverly and Bruce have already found a lot of evidences that lead them to one abandoned part of the city. It is about that part of the city where the criminals, including the homeless people, gather most often.

The two detectives Beverly and Bruce will take a look at this place. And they will try to find out who has stolen the money from the bank. Let’s follow those evidences together and help the two detectives finish their job as soon as possible. That way they will bring justice and put the criminals where they actually belong. No matter how uncommon those criminals might turn out to be… Enjoy and have fun in playing Uncommon Criminals Game.

Also make sure to check out Downtown Robbery Game, you may enjoy playing it.