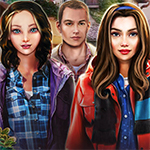 Thief Takers Game: The police know its job best, when they have to deal with criminals and face dangerous situations. However, sometimes there is a need for them to work incognito. And sometimes they even engage just ordinary citizens to get into the trace of the criminals. In the suburb where Sharon, Gary and Angela live, there are some robbers that operate through the neighborhood every night. People started being scared about the situation so they called the police to help them catch the criminals. But once the police came, they decided to ask for some help from regular citizens.

They engaged Sharon, Gary and Angela to work incognito in Thief Takers Game. And try to collect enough evidences that will help the police arrest the ones responsible for the robberies. According to those evidences, the police will be able to find out the identity of the thieves. And make this suburb to be a safe place again. Don’t waste any more time, let’s help in this situation and catch the criminals as soon as possible. Maybe we are not the police. But we could surely help Sharon, Gary and Angela improve the investigation about the robberies. You can play this game on all devices. So enjoy and have fun in playing Thief Takers Game.