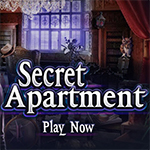 Secret Apartment Game: It’s not that rich people get killed that often but one of the reasons why criminals kill is to get to money. Sometimes the murders of the rich people go together with a robbery and the imprudent criminals didn’t even care about the killed person. They only wanted the money that could be possibly found in the victim’s personal belongings or his house… In Secret Apartment Game: Donald was a very rich and famous man. Unfortunately, one week ago he was found lying dead in the city park. So now he police is looking for the people responsible for his murder. Karen and James are two detectives who are working on this case. The detectives, together with their team, came into the secret apartment that belonged to David.

They like to figure out what was the motive for murdering the rich man. But also to find certain evidences that could possibly point out the murderer. Was it about money or maybe it was about uncleared business and relations with the murderer. Those are questions that wait to be answered in order to solve the whole case. The team of detectives is working on the case. And they hope that the justice will come as soon as possible. You can play this game on all devices. So enjoy and have fun in playing Secret Apartment Game.

Also make sure to check out Secret Land Game, you may enjoy playing it.