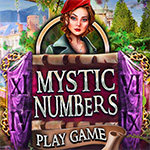 Mystic Numbers Game: Celebrated people and people that have important part in the society, are often aim of the criminals. Those people are usually related to the concept of wealthy life or simply, it is believed that they have a lot of money. Criminals often decide to rob them. Or even kidnap them or someone that is close to them, in order to extort money for their return. In Mystic Numbers Game: Detective Charles and his assistant Betty, are the main detectives in charge for the case with the kidnapped mayor’s son. The kidnappers have contacted the mayor right away, asking for a huge amount of money for releasing the son. The mayor maybe wealthy enough to give them money in return for his son’s freedom. But that would make the criminals winners.

Detective Charles hopes that he will manage to find the kidnappers and act wiser than them. He would like to find a way how to get to the mayor’s son, release him and bring him home safe, without giving the money to the criminals. Let’s see what will happen and help the detectives. You can play this game on all devices. So enjoy and have fun in playing Mystic Numbers Game.

Also make sure to check out Mystic Shadow Game, you may enjoy playing it.