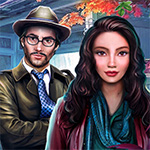 Invisible Killer Game: This team of detectives has solved numerous cases in their career. But always appears something that could surprise them for the first time. Namely, Lauren and Roger are part of this team and for the first time in their career, they got a case of a murder made without any trace. They have been searching around and looking for evidences. But it appeared that there is no single trace or evidence at the place of the crime scene.

The place seems completely clean and there is nothing that could lead the detectives to something that could help them solve the case. And in those cases, even though no one likes to be like that. The police usually decide to close the case as a big mystery. However in Invisible Killer Game, Lauren and Roger would like to explore the place one more time. And see if they could find something at the place where the murder was done. They don’t like unfinished jobs. So they will do their best to find the one that is responsible for the murder and put him where he belongs – in jail. Let’s see together and maybe we will notice something more. You can play this game on all devices. So enjoy and have fun in playing Invisible Killer Game.