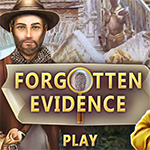 Forgotten Evidence Game: Sometimes it is not that easy to solve a criminal case. It might appear that the police does not have enough evidence for solving the case. Or there are not enough evidences to prove something. In those cases is hardest for the victims and the relatives of the victims who will do everything to get to the actual truth. The urge for finding out the truth was the main motive for the sister and brother Grace and Dylan.

Today in Forgotten Evidence Game: they, together with their friends, are on a detective mission. Namely, they come in the village where many years ago, lived their grand grandfather. In that time the grand grandfather was found dead in his house. But the authorities from that time closed the case as it was an accident. The grandchildren suspect that it wasn’t just an accident but an actual murder. So they would like to find out enough evidences to prove the murder in Forgotten Evidence Game. It might be little bit hard because the murder happened years ago. But Grace and Dylan, together with their friends, will do their best to solve the case, hoping that it is not too late. You can play this game on all devices. So enjoy and have fun in playing Forgotten Evidence Game.