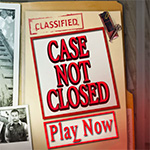 Case not Closed Game: There is still one case that stays open in this police station for few years. The case didn’t seem that complicated at first. But it appeared that the criminal who did this terrible crime could not be caught that easy. Namely, it is about a murder of the businessman Douglas. This case stays open for couple of years because the key evidences are missing. In lack of the evidence, the identity of the murderer can’t be revealed and that is really bad undesirable situation for the officers. Because they lose their authority, including the people’s trust.

However in Case not Closed Game: The two police officers, Nicholas and Christine, together with the detective Heather, decided to finally bring justice for this case. They are on a mission to check out again every possible trace and every material evidence. So they could find out what was missed previously, when the case was investigated for the first time. Maybe we could also help Nicholas, Christine and Heather in finding those evidences. So they could finally bring this case to its end. You can play this game on all devices. So enjoy and have fun in playing Case not Closed Game.